Wednesday night the United States lost a patriot.  At 1:50am on I-84 near milepost 74 Leo Stratton died of injuries sustained in a truck accident while travelling in the eastbound lane.

Leo Stratton was a true American Patriot speaking against those that wish to infringe on our inalienable rights and those that are violating the Constitution of this great Nation.

The only love greater than Leo’s love of country was his love for his wife Shelley and his family, and that love for his family fueled his activism.  Leo could always be found at rallies defending the Constitution and speaking out against those that are working to violate the principals set forth in the document used to establish this great country.

It was an honor and a privilege to work with Leo in defense of the Second Amendment and he was always so full of life and brought a lot of joy to our organization.  His razor sharp wit and sense of humor was always welcomed as was his insights about bring attention to our cause.

Leo will be greatly missed by this organization and we have lost a true American Patriot.  Below are a few words from the people that had the honor of working with this great man.

It was only a short time ago that I had become acquainted with Leo Stratton. Leo had become involved with our group some time back and eventually began writing articles for us to share with the community.  While I was not fortunate enough to know the man, as we were separated by great distance, I got to know him by way of his writing.  A passionate a staunch supporter of our God given rights, Leo expressed through his words who he was in his heart…a truly good and decent man…a man of family, faith, and conviction.  While I will never have the pleasure of crossing paths with Leo or sharing a laugh, I am honored to share the same space wherein he deposited his words of wisdom so eloquently.  I never got to know Leo, but I will miss him dearly.  In his memory, I will continue to carry the torch that he bore so proudly.  Rest In Peace my friend, and my God keep you in his embrace.

Leo Stratton was a good man. He loved his wife, family, and friends. That was clear. His happiness, humor, and joy with his life came through in so many ways.

He had an irreverent, lighthearted sense of humor that made everyone who knew him laugh. You couldn’t help but smile when you talked with Leo.

Then, too, he was passionate in his beliefs and fought for causes he believed in, whether it was pro Second Amendment advocacy or working to support candidates he believed in, or speaking uncomfortable truths about groups and individuals who acted in a hypocritical or dishonest manner.

Leo was smart, had a razor sharp wit, was tough and fearless, but also had a big heart. He cared about people, he cared about his country…it showed in all he did.

Today as I read the messages and posts from his wide community of friends and family, I was humbled by how much Leo impacted so many lives. How much Leo meant to so many people. I count myself lucky to have known him, and will miss his sharp intellect, humor, and good heart. God bless and keep you Leo. My thoughts and prayers with all those you held dear.

I did not know Leo personally, but when I read his articles, I knew we were brother in arms. We were two people from opposite sides of the county yet we shared a strong passion for the Second Amendment and freedom. In a piece Leo wrote he said, “Part of my support for the Second Amendment is my appreciation of how we got here and remember why we need to defend it. Many Americans get caught up in the amenities available at their fingertips while forgetting the blood and courage given by historical figures that enabled the innovation that created it.” Thank you Leo for fighting for our rights and for your contribution to protect them. May you rest in peace.

Through his actions Leo has made this Nation a better place and it is up to us to continue what he has started.  Rest in Peace my friend and know we have the watch your mission on earth is done and you have proved that you are a patriot in the truest sense.

A GoFundMe page has been setup to help the family left behind by this tragedy please donate what you can to help https://www.gofundme.com/help-for-leo-strattons-family.  The Liberty First Foundation will be doing more to help this great man’s family stay tuned for more details. 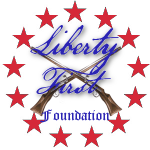