From September through April, 1787-1788, The Federalist Papers were written and published in New York newspapers. These editorials explain the new Constitution, including what the different articles and clauses mean.  And they encouraged the people of New York State to ratify the Constitution.

What are The Federalist Papers?

The Federalist Papers primarily explains the limited rights, liberties, and freedoms the citizens would give up so the new federal government had enough power to govern effectively and protect the citizens.  It attempts to answer the questions the citizens had before “signing” (ratifying) the new Constitution.

Who wrote The Federalist Papers?

The authors’ names are not important for several reasons.

First.  Before signing a contract (like an employment contract, a contract to buy something, or to perform some service), a person or company might have some questions about the contract. The people involved with the contract, or their lawyers, might spend some time writing out an explanation of what the contract’s clauses mean.

Now comes the important point. Many years pass and someone has a question about the contract. Do they try to figure out the names of the lawyers who explained the meaning of the contract? No. They don’t care what the lawyer(s’) names were. They go back and look at the original notes that explain the clauses in the contract.  They want to understand to what the original signers were agreeing.

The Federalist Papers are the original notes about the United States Constitution. Since they were written to explain the Constitution before ratification, they are the first explanation of the Constitution.   It is the information within the Papers, not the authors, that is important.

Second.  I believe that “inspiration” is the second reason that the authors’ names are unimportant.  Because of “inspiration,” written statements are often deeper, clearer, and better than we would expect if we knew the author and their abilities.

In the case of The Federalist Papers, I believe this “inspiration” is very present.  Knowing who the authors were might confuse us, because they might have made different arguments at other times in their lives.

Third. I am an author. I’ve written several novels, non-fiction books, and many non-fiction articles. I’ve discovered the wonderful surprises that “inspiration” brings to my writing. I don’t have the foggiest idea where it comes from. I just know that it exists.

When I write something, I do inject myself. I put my name on all articles and books. So, my ego is involved. I might (even subconsciously) edit my inspiration in a way that makes me feel that people won’t reject me personally, or I might not have the courage to write something that I feel will be controversial. But if I wrote anonymously, I would feel free to follow my inspiration without self-editing. And, more importantly, I wouldn’t be writing to get money and/or power—the two most powerful motivators of human behavior. I couldn’t get either because no one would know who wrote it. If it was wonderful, I wouldn’t get any power or glory.

We know of people who wrote anonymously, then were happy to “out” themselves so they could get acclaim or money. But we’re talking about the authors of The Federalist Papers. They displayed real humility. They wrote freely, without the possibility of gaining money or power.

Fourth. If someone studies The Federalist Papers, they can usually guess who wrote each Paper, because each person has a different writing style. I guessed during my research, but simply did not care and quickly forgot.

I believe that if the authors wanted to be anonymous, then it is my responsibility, as a reader and student, to accept the authors’ decision. 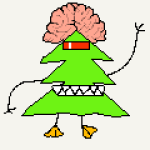 All work and no play?! Meet Strong!