Civilization has always progressed by adapting as the need arises, inventors and engineers devise solutions necessary to thrive in an ever evolving world.

The Cavemen developed fire and the wheel to survive in their environment, the Chinese gunpowder , We can look back and calculate empires survival and crumbling defeats, simply by observing the innovations created by their generation or the foes that rose up and defeated them.

In my humble opinion, the epitomizing invention that had the largest effect on our evolvement into the mighty United States Of America, is directly attributable to Samuel Colt.

In the early 19th Century, we as a young Nation, establishing our identity away from the U.K. needed to expand beyond the original 13 Colonies, the massive western frontier was untamed, but rich with agriculture and opportunity not found in the East.

Eager courageous pioneers would encounter many barriers with their trek west.

Not the least of which was hostile Indians, we had the crude but effective percussion weapon, they had arrows and spears, the speed of reloading the rifles determined life or death at the hands of the Native Americans so our brilliant minds devised the percussion revolver.

It still was slow to reload, but it gave the bearer 6 consecutive opportunities to defend themselves before fumbling with the process of reloading rather than simply the single shot the musket afforded.

A frenchman Louis-Nicolas Flobert in 1845 invented what was to become the first pre-loaded self contained cartridges, it was truly a game changer!

While the Native Americans would trade with mountain men and trappers for percussion weapons to better survive encounters with the settlers and Calvary, the invention of the cartridge and conversion of percussion pistols to the new cartridge cylinders became a large advantage to the individuals who could secure them.

In April of 1861 our Nation turned against each other,4 miserable years of battles between Family members, neighbors, all depending on which side of the Mason – Dixon line you resided.

Out of that dark period came my personal favorite era… the WILD WEST.

Some of the infamous outlaws we all pretended to be as kids with our cap guns and scarves, Jessie James, Younger Gang, John Wesley Harden and possibly the most deadly outlaw James Butler Hickok…. better known as Wild Bill Hickok.

Hickok grew up in Illinois , his Father was an ardent abolitionist and their home a stopping point on the underground railroad that tried to smuggle slaves to freedom.

Wild Bill would eventually become a Constable , his fondness for gambling and incredible prowess with his .36 caliber pistols would soon help create the outlaw many feared and revered.

Among Bill’s early feats of gunplay was an amazing shot at 75 yards in a duel with a gambler who won Bills prized pocket watch, the exact shot has scientifically been recreated today and it is still a nearly miraculous feat of marksmanship few can repeat.

Bill always sported long wild hair and a neatly trimmed goatee with a handlebar mustache, He was also fond of flamboyant wear, that made him instantly recognizable, the fact he was well over 6 feet tall only added to his mystique.

Bill was a lawman as well, unfortunately during a shootout, he turned and fired, mistakenly killing his deputy, Bill would never fully recover, resorting to the bottle and endless hours at a poker table.

Hickok’s eyes were also failing him, He heard about a booming community in the black hills of South Dakota where the gold flowed through the little rivers in the streets, He joined his friend Charlie Utter and arrived in 1876.

Among the allure the outlaws in the Old West provided was the live fast and die young lifestyle, one thing you can count on as a famous gunfighter…there will always be some young punk who thinks he is faster than you.

Bill knew his days were numbered, he had visions, dreams, Deadwood would be his final camp.

Hickok always sat at poker tables with his back to the wall, able to see everybody who might sneak up on him and get the opportunity to be the man that kills Wild Bill.

On August 2 1876 Bill would enter Saloon 10 on Main Street in Deadwood and play his final hand, a game was already going when he asked to be let in, the individual sitting against the wall would not give up his chair, he didn’t want to foul his current winning streak.

Hickok reluctantly took the open chair with his back to the front door, Jack McCall would cowardly walk up and shoot Bill in the back of the head, Wild Bill died instantly holding a pair of aces and eights… forever to be known as the dead mans hand.

John Butler Hickok is buried in Mt. Pleasant Cemetery near his friends Charlie and Jayne Cannary AKA Calamity Jayne in Deadwood South Dakota, as a lover of the OLD WEST, my bucket list included a trip to see the City which is now a historical landmark, the entire City.

My Wife and I traveled 3000 miles round trip and stayed in Deadwood, going through Montana I viewed General Custard’s battlefield, The devils tower in Wyoming,Mt. Rushmore, The Crazy Horse Monument, hundreds of buffalo, I even met Bob Boze Bell the editor of True West Magazine.

The video included here is a few of the many things i enjoyed and you can too, its ALL within such small geographical area, take at least 2 weeks to see it all.

I found it humbling to walk in the same place as Wild Bill, Seth Bullock, Al Swearengen, General Custer, even Butch Cassidy and the Sundance Kid, the town he was named for , Sundance Wyoming is only an hour and a half from Deadwood on the way, I could smell the gunpowder, hear the old time piano playing, call girls giggling, and pocker chips being tossed across tables,” i’ll see your bet and raise you, if you have the stomach”

Part of my support for The Second Amendment is my appreciation of how we got here and remember why we need to defend it, many Americans get caught up in the amenities available at their finger tips while forgetting the blood, and courage given by the historical figures that enabled the innovation that created it. 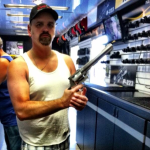 The Moving Wall, is Very “Moving”

Range Review of the Walther PPK/S

All work and no play?! Meet Strong!